Cable wireless routers are great if you want to free your computer from a wired Internet connection that won’t let you move more than a couple of metres away from the cable modem.

Or perhaps you want to create a local network so others can connect laptops and notebooks to it and share files.

Each of these computers needs to have a wireless networking card fitted. It can be fitted internally or plugged into an external socket.

The most recent Wireless Local Area Networking routers and cards use the Wireless N standard, also known as IEEE802.11n.

Find out About Wireless Internet Cards


What do cable wireless routers do?

Most do three things. They...

Connect computers and networks together 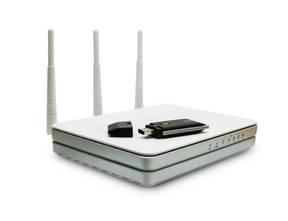 Routers route data between networks. They send the data in packets. Each packet is made up with the information we want to send and is given two addresses: where it has to go and where it’s from.

It’s the router’s job to send these packets of information via the fastest route.

The router controls where the data is directed by switching between devices connected to the Local Area Network (LAN).

This lets devices on the LAN communicate efficiently, so that they don’t waste the available bandwidth and unnecessarily slow the network down.

This becomes a wireless access point that other computers can connect to. It allows you to access files shared on the network.

You can make cable wireless routers into wireless Internet access points by connecting the router to the Internet Service Provider’s (ISP) data cable, via a cable modem.

Your ISP will often supply the Modem as it needs to be the right type to match the ISP’s cable to the router, as each has different characteristics. The cable may be a copper or fibre optic (light pipe) and is totally unsuitable for connecting directly to the router’s Ethernet port.

The Modem puts the data, going to the Internet, onto the cable in a way that matches the cable’s characteristics. This is called Modulation.

The Modem takes the data coming from the Internet off the cable in a way that matches the router’s characteristics. This is Demodulation.

Can you see where the name Modem came from?

So the Modem interfaces these two incompatible things, the ISP’s cable and the router, and allows them to communicate.

The wireless part also has Modems

The only reason we use Radio is that it’s a great way to carry information without being attached or having to stay still.

A wireless Modem gets the information onto the Radio Frequency energy as it’s transmitted, and gets it off again as it’s received at the other end of the radio link.

The wireless router contains a radio modem as does each wireless Internet card in each device connecting to the network.

What do you connect to cable wireless routers?

As well as having antenna/s that transmit and receive the radio frequency energy that carries the information wirelessly, there are several sockets for wired connection on a router.

A simple home router might have several computers connected via cable and/or wireless. Both are part of the same Local Area Network and can be a mix of wired and wireless.

Some routers have four wired-LAN sockets that you can use for directly connecting devices using a standard LAN cable.

But to connect cable wireless routers to the Internet, they must also connect to a modem via an Ethernet cable.

While there may be routers with a built-in Modem function available, keeping the Modem and router as separate devices gives more flexibility when you want to upgrade.

But you can also connect to the Internet service wirelessly, via a cellular network, for what is becoming anywhere/anytime Internet access.

How does wireless Internet work?

Go from Cable Wireless Routers to How Does Wireless Internet Work?