Energy harvesting can eliminate the need for batteries in some low-powered electronic devices such as wireless sensors. And if you don’t need access to change batteries it presents new exciting opportunities. You could embed sensors in building materials for applications such as temperature sensing for heating control and fire monitoring. Or monitor the structural integrity of bridges while harvesting the required energy from the vibrations caused by traffic.

How does energy harvesting work?

The electronic circuits in wireless sensors and other devices need energy to make them work… specifically, they need electrical energy. This is often supplied by a battery, or some other power supply connected by wires.

Energy harvesting technologies capture one or more of the many forms of energy available from the surrounding environment and converts it into electrical energy. Then it’s conditioned to produce a ‘battery-like’ voltage source that can supply electrical energy in a form that the sensor can use. 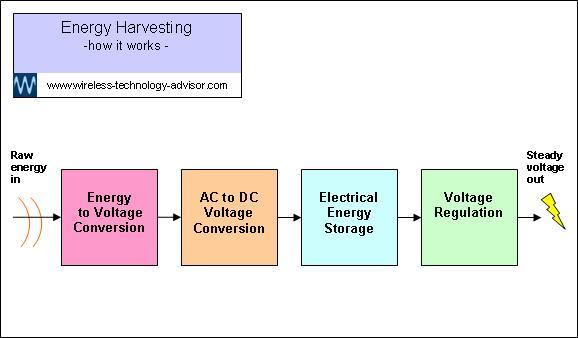 What types of energy can we harvest?

There’s energy all around us, all the time. It comes from natural sources and waste energy from human activity.

Even if the energy isn’t continuous, we can still capture some of it, store it and use it.

It’s like pumping up a tyre. To keep a tyre inflated, you only have to top it up with a pump  occasionally, to replace any leakage. The compressed air can come from any pump in any location. The energy used to compress the air may be electrical, perhaps on a pump located at your local gas station, or mechanical energy supplied by your muscles as you pump up a tyre mechanically on the side of the road.

An energy harvesting power supply only needs to be ‘pumped up’ with energy often enough to replace the energy being used by the electronic device. The energy could be harvested from one or more forms of energy.

Useful energy can be anything from ‘continuous low background energy’ to ‘intermittent peaks of higher energy’… and anything in between.

So, what types of energy are suitable for converting into electrical energy for powering wireless sensors?

We can scavenge this from sources such as...

How do we convert these to electrical energy?

Different methods are needed to convert the different forms of raw energy suitable for energy harvesting...

You can use photovoltaic (solar) cells to convert electromagnetic radiation from the sun into electricity.

These aren’t anything new, but are now becoming available in different forms, such as flexible and ‘stick-on’, so can be attached to many different surfaces.

A square metre of solar panel can produce around 100 Watts of power (with a solar panel that’s 10% efficient – converts one tenth of the 1 kilowatt (full sunlight) striking it into electricity). So even a very small panel can produce enough electrical energy to power a sensor located outdoors, and in some cases, indoors.

If you wanted to power a wireless sensor in a room you could mount the sensor near a heater, where one surface of the Peltier is being warmed by the heater and the other side is at a lower temperature, closer to air temperature. A voltage is developed across its output.

Vibration has often been converted to electrical energy using the ‘electrical generator’ principle of a magnet moving relative to a coil of wire which then develops a voltage.

But a new technology that’s increasingly being used in vibration energy harvesting devices is the piezoelectric MEMS (Micro Electro Mechanical Systems) device. Vibrations induce stress and strain into its tiny cantilevered beams and generate a voltage. These MEMS devices can generate more energy for their size (energy density) than the other traditional methods.

While RF levels are generally quite low, it may be possible to locate a sensor near an RF source such as a WiFi  access point or router where the energy intensity may be higher than if you just randomly locate it.

RF energy harvesting devices could self-tune to the frequency of the available RF energy to maximize the energy they could extract.

Wireless sensors embedded in materials such as walls can be energized by exposing them briefly to an RF source long enough to provide the energy they’d need to enable them to transmit their data to a receiver.

How do we store and condition electrical energy?

Modern electronic chips typically need a constant (DC) voltage source of 3.3volts. So if the converter doesn’t intrinsically generate a high enough voltage to run the electronics then some electronic conditioning is required to boost it to a higher voltage. If the incoming voltage is changing (has an AC component) then this is converted to DC.

The electrical energy is usually stored on a ‘charge storage’ component called a capacitor. This acts as an energy reservoir and will supply the device’s average energy needs including the peak electrical energy it requires when it wakes up and transmits. The capacitor needs to store at least the average energy requirements of the wireless sensor.

What determines the amount of energy we need to harvest?

In many cases only very small amounts of energy can be captured and stored, so we need to know how much energy will be required and how frequently.

We need to know…

A protocol to define and limit these is currently being developed. This will set the standard to…

And if the sensor can rely on the receiving end doing some processing, then the sensor may not need to use its own energy to do any.

This may further reduce the amount of energy that a wireless sensor will need. In some cases if a sensor can store and process some of the data, it will have less information to transmit and this may reduce its energy needs, depending on the proportion of transmitting time.

With energy harvesting, wireless sensors and networks of wireless sensors will have decreasing need for non-rechargeable batteries and be less compromised by a need for regular battery replacements, making it possible to permanently embed sensors in physical materials or implant sensors for monitoring chronic medical conditions.

Energy harvesting technology has the potential for massive growth.


FacebookTwitterPinterestTumblrRedditWhatsApp
To Top of page