Wireless Strain Measurement can lower installation and set-up costs while significantly improving reliability and data quality. However, there are some things you need to know to help you avoid the traps.

Strain measurement isn't just for 'new things'. There are many structures still being used beyond their intended lifespan and loading.

Bridges are a prime example, where over the years traffic using them has increased way beyond what was envisaged when they were designed. Often, there's no easy way of knowing how they may have become weakened over time, and how they may respond to future stresses and strains imposed on them by traffic peaks, wind and earthquakes.

Continuous monitoring of strain at key points in a structure, old or new, is a practical way to get information indicating that maintenance or strengthening is required... or as a predictor of structural failure.

From microstrain to Megatonne...

The range and scale of strain measurement applications is enormous, ranging from precision laboratory balances to large buildings and bridges. 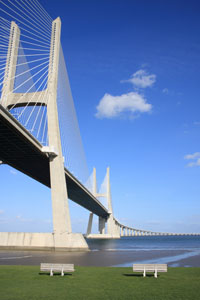 The benefits of going wireless come about because you...


However, with wireless strain measurement products you do need to ensure that the radio signal can be received from all of the strain gauge sensors on the network. Generally a path between the two that doesn’t have too much metal in between will suffice. There are also other sensor networking options where sensors next to each other pass the message on, from sensor to sensor, so don't all have to be in 'line of sight' of a receiving station.

In wireless strain measurement products, strain sensors are often built as sub-assemblies ready to fit directly into many different types of application. For example...


And they can potentially be molded into a number of custom applications…at a cost.

Strain tells us about how the length of an object changes when we apply a force to it.

STRAIN = the change in length when a force is applied, divided by the length before the force was applied.

And that’s about it.

The force can be anything from a push with a finger to a weight, bearing down on an object such as a heavy metal construction beam. The beam would shorten on the top and lengthen on the bottom as it bowed downward. This what we want to sense.

OK, that’s the end of the physics lesson...

now back to wireless strain measurement, but one last thing…

Strain is dimensionless…it has no units… Unlike length, which has metres or feet, weight has pounds or kilograms, speed has kilometers or miles per hour...

More logical than original, it’s defined as… The amount of strain that produces a deformation of one part per million. That’s so small I nearly didn’t bother mentioning it!!

How do we measure strain?

The most basic and common sensor element used in wireless strain measurement for measuring strain is called a strain gauge.

The basic strain gauges can be used for wireless strain measurement as they are, but you should already have some basic knowledge before attempting this, as the learning curve can be quite steep.

However, as a large step up from the basic sensor, there are now a great variety of strain gauge sensor modules available, and these will do most of the hard bits for you.


Ideally you want a sensor to give you a pure signal that accurately represents the strain that you want to measure.

Often the signal from a strain gauge is very small. So small that it usually needs amplification before it can be used. There are some good wireless strain measurement products available for doing this, but here are some things you need to know first, to help you make the right choice.

Naturally you should aim for something that is robust, easy to mount, waterproof, reliable, good value for money and designed and manufactured by a rock-solid organization, backed by a recognized quality assurance system. And then there’s accuracy...

It can, if you let it! Amplifying the signal isn’t difficult, but can introduce an unwanted side effect. When you amplify the signal you also amplify noise… you can’t avoid it. And by noise, we don’t mean noise from the ghetto blaster next door, we mean...

This can come from many different sources such as electrical appliances, computers and radio transmitters. The trick is to remove as much of the noise as possible before amplifying.

So an amplifier needs to have signal conditioning built into it… some means of rejecting and filtering out unwanted electrical noise… otherwise the noise may appear like a genuine signal.

This is bad enough when you recognize it’s present, but what if you don’t, and think it is real? That could lead to some bad decisions if you base them on bad data!


You don’t want the strain to suddenly appear to increase when the guy next door turns on his arc welder.

Or to discover that when the noisy air conditioner on the floor below is fixed, the strain data suddenly appears to change in value… when the strain hasn’t really changed.

An in-line amplifier module for a bridge configured strain gauge sensor is an excellent choice for wireless strain measurementfor several reasons. The module should also supply the excitation voltage for the bridge, and ideally allow you to program the amplifier gain.


Don't let your strain gauge try to be a thermometer

Strain gauges are affected by temperature...

They’re all affected to a greater or lesser degree.


Let’s say the strain doesn’t change… you keep it the same... hold it at a fixed value… keep it constant.

An ideal strain sensor would not be affected by a temperature change.

This change appears as if there has been a real change in strain. It’s a totally unwanted and UNreal effect.

However, good quality strain sensors will have inbuilt temperature compensation and their specification will reflect this… giving a figure that states a very low temperature coefficient... this just means they say how much the strain will apparently change for every degree of temperature change that takes place… remember, ideally you want this to be zero. In the real world it’s not, but you do want it to be small... to the point of insignificance.

OK, it’s not a perfect world and the strain gauges won’t be exactly the same. However, the challenge for the manufacturer is to get them as close as possible to the same.

The closer they are, the smaller the unwanted temperature effect is.

The manufacturer states this figure in the specification, usually as a percentage of full scale for every degree of temperature change.

Choose a strain gauge that isn’t significantly affected by temperature.

When carrying out wireless strain measurements you don’t want the temperature effect to swamp the very measurement you’re trying to make. This may be especially important if you want to measure strain over a wide range of temperatures, say from sub zero to +40C.

Do you want your strain measurements to be super accurate?

Some wireless strain measurement modules will already have this feature built in, but if not, or if it’s not as good as you would like, here’s a way to reduce the temperature effect still further.

You’ll need to accurately measure the sensor temperature as well as the strain… and at the same time. Then, if you look at the wireless strain measurement product manufacturer’s specification, or measure the effect yourself, you’ll see how much apparent strain you get for each degree of temperature change that takes place. You can then correct each measurement by adding or subtracting the amount of apparent strain contributed by the temperature change.

While you don’t need to know too much detail, or have to go it alone, it is important to understand the terms and numbers in a manufacturer’s specification. From there you can usually make a reasonable choice of the instrument that’s right for you.

A manufacturer provides specifications that tell you what you can do, what you should do and what you absolutely must not do to use the product correctly.

Here are two things you must not do

If you want to measure up to 1000 tonne, don’t select a strain gauge whose range is rated at a maximum of 500 tonne.

You may permanently damage the strain gauge elements, especially if you exceed 2x full range… and the readings you get, between 500 and 1000, will be meaningless… most likely having hit a 500 tonne ceiling, where all the numbers become the same.

When you’re dealing with large load equipment, mechanical damage and personal injury are also possible if you exceed the ratings in the specification.

At the other end of the scale, don’t use a strain gauge that’s rated up to 1000 kg if you only want to measure loads up to 1kg. The reason is because you’d only be using one-thousandth of the available range and the signal would be down in the noise.
The readings would very likely be inconsistent, and at worst, jumping all over the place.