How Do Pagers Work?

The question how do pagers work, is best answered by considering a pager, not just as an individual item, but as part of a larger messaging system intended to instantly notify people of important events that they need to respond to.

A pager is a communications device, that receives the messages transmitted from a paging controller. It may include one or many pagers. They are often used in hospitals, hotels, restaurants and other organisations where rapid change and accurate and timely responses to them are required routinely.

In simple terms, a wireless paging system transmits messages to one or more pagers, but a message can only be received by the pager that the message is intended for.

Each pager has a specific address and each message is addressed to one or more specific pagers. Wireless pagers use a special code that the whole wireless paging system understands – they all speak the same ‘language’.

How do pagers work in a paging system?

What types of pagers are there?

Think of a pager as the thing that receives and displays a message. There are several devices that can do this. For example, the main ones are:

A personal pager must be small, robust, reliable and secure. There’s also an element of personal choice as to which and how many communications devices you may want to carry.

How do pagers work at the communications level?

Each uses wireless technology. The message is carried by Radio Frequency (RF) energy transmitted by the paging controller.

Dedicated wireless pagers are usually one-way communications only – they only receive and can’t transmit. However, other devices such as Smartphones can not only receive a message, they can also transmit an acknowledgement (indicating 'message received') back to the paging controller.

Here’s a diagram of a typical dedicated wireless pager, showing its functional blocks and how they’re connected – answering the question how do pagers work from a ‘pager’s perspective’. 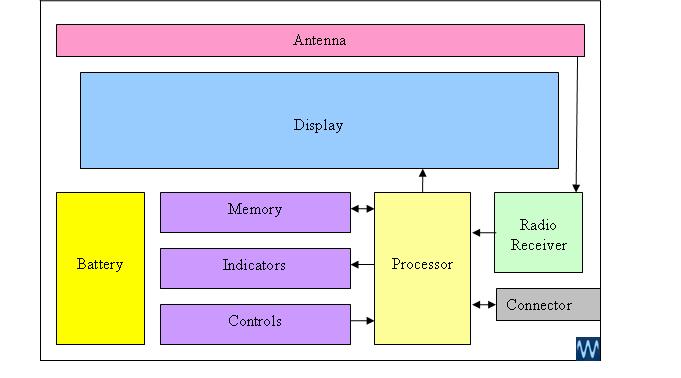 The antenna captures some of the RF radiation transmitted by the paging transmitter and feeds it to the receiver.

The receiver removes the information from the RF carrier (demodulates it) and sends the encoded information to the processor.

The processor is the ‘brain’ of the pager. It decodes the information from the receiver and reproduces the original information sent from the paging transmitter. The pager checks to see if the message is intended for it, and if it is...

It stores the message in the electronic memory. Pagers can store many messages, depending on memory size. For example, a pager may typically store 50 messages.

The control buttons enable you to scroll through your messages and generally configure the options that best meet your needs.

You can connect your pager to a computer with a USB cable to configure it. The computer must have the correct ‘pager configuration’ software to do this.

The components that carry out these functions are enclosed in a robust plastic case to provide a high degree of protection.

And here’s a page that looks at the big picture… how are the messages generated, how can these systems help organizations that need to manage and respond to complex real-time events?

Go from How Do Pagers Work? To Pager Systems


Go From How Do Pagers Work? To Wireless Technology Advisor Homepage